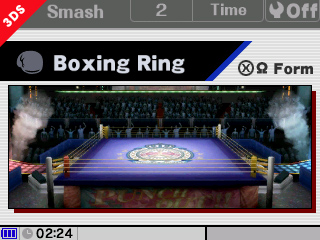 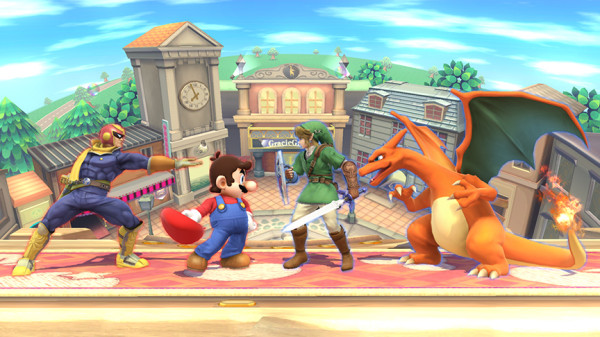 In the 3DS version, your fighter gets outlined by your team color. So, how does this work in the Wii U version? Check out this screenshot. In this picture, the outlines may seem faint, but the color intensity is consistent. This means that the farther away and smaller your fighter appears on the screen, the clearer the colors will look. 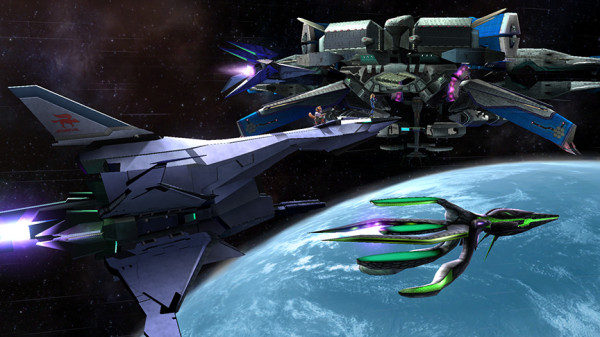 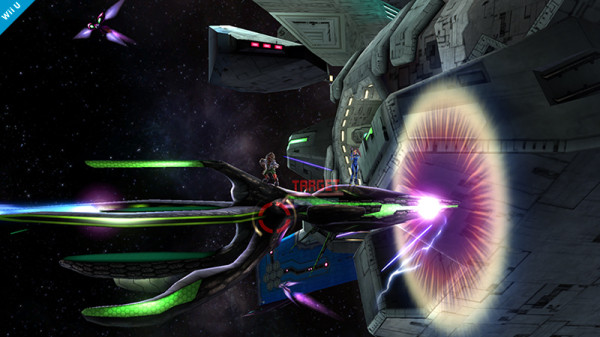 Missiles are launched towards the Orbital Gate! The force field shields the machinery for a while, and the missiles eventually get shot down by team Star Fox. Overall, this stage feels like a ride. It’s pretty hectic, so hold on tight!

The Arwings are passing through the gate! And the fighters hop on for a free ride!!

This assist trophy is Sheriff. Sheriff was an arcade game released in 1979. In this game, the players aim by choosing one of eight directions to shoot using a second joystick separate from the one that controls movement. It was quite a revolutionary game for its time. For shooting games overseas, it’s common to see games that utilize the left stick to move around and the right to determine the direction to shoot, so we can say the origin of modern shooting games was this game–which is pretty remarkable.

SETTLE IT IN SMASH!!!

Finally, Super Smash Bros. for Nintendo 3DS is being released overseas. Congratulations!! With the game released globally, from here on out I’ll be posting about some of the hidden elements in the game. However, for now they’ll only trickle down a little bit at a time. I’ll be done with posting new pics by the end of the year, so I hope you’ll enjoy the rest of the ride.

A veteran of the Forum, you'll probably know me as H-J (Kaabii) or 8B1T. My main role on the website is as an assistant editor. My favorite Nintendo franchises are Mario, Kirby and Legend of Zelda, though I do have fleeting moments of entering fandoms beyond the Big N (mainly Japan only stuff).

GOT THE GAME IT’S UPDATING FOR ME NOW!!!!

Hey did you see my updated FC? The first one I gave you was wrong

Gonna get it tomorrow.

THE COINS WE RECEIVE ON THE DEMO DONT COME TO THE FULL GAME! 🙁 Well at least we start with 500 coins! 😛

funny how mario isn’t on the title screen.

I HAVE SMASH! AUSTRALIA HAS SMASH! WE CAN TALK SPOILERS NOW!!! (Maybe…)

SPOILERS that this comment will have hidden characters because this is my Top 5 Characters That Should Be Cut In Smash 5, so if you don’t want to be spoiled, please don’t read the comment, thanks.

And now here’s my Top 5 Characters That Should Cut In Smash 5, enjoy.
5. Dark Pit
4. Bowser Jr.
3. Lucina
2. Greninja
1. Wii Fit Trainer
That’s my Cut Newcomers list for Smash 5. Agree or have a different list? Reply if you have one and thanks for reading.

But… Wii Fit Trainer and Greninja are so unique…

WHAT???? YOU GOT TO BE KIDDING!!!!!! So you take out 3 of the most unique characters in the game?? The clones will only be added in the games if they dont have more timeto do another character but they have space in the roster left, so Dark Pit, Lucina and Dr.Mario will only be back if thats the case!

BUT TAKING OUT WII FIT TRAINER???? And who says that Smash 5 will have a cut list?

Ever since Melee, there’s 5 characters that are cut from the previous game. Smash 64 is the only game where the original 12 is in every game. So, Melee had 5 cut characters and Spoilers, Brawl had 5 as well. And WFT doesn’t feel like a Smash character. And no, I hate clones, semi clones are fine, but clones are a waste. Brawl is the only game I think has best roster that has barley any clones at all. And I really wonder why Sakuari made the Smash 4 roster, spoiler; disappointing.

But they were cut to be replaced or because they were clones like the Doc! WHO’S GONNA REPLACE WFT, GRENINJA AND BOWSER JR.???

Sakurai will handle it.

Disagree on Toon Link and Lucario.

At least I don’t prefer Mario and Link clones over two of the most creative newcomers, Bowser Jr. and Greninja.

Toon Link isn’t a clone of Link. If he was, he wouldn’t even be a playable character in Smash 4. Remember Young Link? Yup, he was a clone and got cut in the next game. As for Bowser Jr, he’s kinda cheating using a Koopa Clown and many say he has some movements similar to Diddy Kong. Greninja was playable because Sakurai was choosing a Pokemon from Pokemon X/Y. And I understand why Dr. Mario should have been cut(Seriously Sakurai?) As for Lucario, he’s fine and a awesome Pokemon character.

1. Mewtwo wasn’t a clone and he got cut. Plus, he’s STILL one of the most popular Pokemon of all time. In other words, cuts aren’t limited to just clones. 2. The Koopa Clown is more of a weapon, like the Pikmin, if anything. Also, the only attack Jr. has similarities with Diddy Kong is his Neutral Special, so these people saying “Jr. is a Diddy Kong clone” must not really be paying attention. 3. Just because Greninja was added to have a Gen. 6 rep doesn’t mean he’ll instantly get cut. But, the same could be said for Lucario,… Read more »

I can honestly see Lucina getting cut more than Dark Pit. I can also see Dark Pit getting the “Luigi Treatment”. I think I only can see Lucina getting cut due to my personal bias of wanting Anna to be the sword using Fire Emblem rep lol. Toon Link is more popular than Link in Japan so I don’t see him getting the boot. Without further adieu my list is:
1. Lucina
2. Lucina
3.Maybe Dr. Mario
4.Lucina
5.Lucina
No need to cut hard work and an original moveset.

True, but Lucina could be given the Luigi Treatment, too. But hey, it’s you’re opinion, and at least you’re eliminating some clones.

I think toon link is one of the characters that will stay! almost half of the Zelda series has him! 🙂

Why would you cut three unique newcomers? @.@

Because it’s my opinion.

SPOILERS Anyways this game was really worth the hype. After December, it’s gonna be really sad to see all the pics of the day go away. In the meantime, there were a lot of characters that I thought were gonna suck, but I ended up loving them. Villager- I enjoyed his recovery and I love his alts Megaman- Really interesting moveset and I’m probably gonna enjoy playing as him Pacman- his moveset is so cool, and I think he’ll be fun to play as more Dark Pit- actually an interesting personality to him which separates him from pit Dr. Mario-… Read more »

Do Lucina and Marth and Pit and Dark Pit have different custom moves?

Pit and dark pit have different custom moves and marth and lucina have same custom moves.

Villager- Pretty cool, not as powerful as I expected, but cool, nonetheless. Wii Fit Trainer- I’m… not very fond of her. Like Snake, she feels a little… out of place. I don’t know why, though. Game & Watch, R.O.B., Duck Hunt, and Ice Climbers, all obscure fighters, feel perfect for Smash, but Wii Fit Trainer just sticks out like a sore thumb to me. Mega Man- Awesome. He’s powerful, great to control, and is filled to the brim with nostalgic Mega Man memories. Rosalina- Unlike Wii Fit Trainer, I think she’s fit (Lol, bad pun) for Smash, it’s just that… Read more »

Wait,I’ve got some questions: 1st:Why did he say: “I’ll be posting about some hidden elements in the game” instead of I’ll be posting about the Wii U version? Does that mean that even after the game releases globally, they’ll still post 3ds pictures?
and what does “they’ll only trickle down a little bit at a time.” mean?
And well,by saying: I’ll be done with posting new pics by the end of the year” does that mean that he sorta implied that the Wii U version will come only at the end of the year instead of the end of november?

AWNSERS IN ORDER OF YOUR QUESTIONS! 😛

1- Because the secret characters and unlockables for the 3DS are hidden too! 🙂
2- Yes
3- Its about the hidden stuff. That means he’s only going to show hidden stuff like he did in the past with revealing characters, very slowly!
4- Maybe, or he wants to post hidden things about the Wii U version too!

[SPOILERS] Lucina, Robin, Dark Pit, Fox, Falco and Palutena all have special quotes if they win against a certain character, so I thought I’d post ’em here: -Robin: (male: against Lucina) “Lucina, I hope I didn’t hurt you” (female: against Lucina) “How can you protect Chrom if you can’t protect yourself?” -Lucina: (against Ike) “And they call you the Radiant Hero?” (against Marth) “THIS is the Hero King?” -Dark Pit: (against Pit) “Where’s your Goddess now!?” -Palutena: (against Pit) “uh, So sorry about that, Pit” (against Dark Pit) “Poor little Pittoo” -Falco: (against Fox) “You’re off your game, Fox!” -Fox:… Read more »

Did you get my updated FC? I typed it wrong the first time.

nope, I’ll get it now

This is really cool! Where did you find this?

I did these matchups myself

Yeah, its really cool, especially the fights! I saw your RWBY picture so I thought I should get one too.

i hope they do:
-mario
(against Bowser) So long, Bowser!

DUCK HUNT DOG I SO CUTE!

SINCE WE CAN TALK ABOUT SPOILERS MY NEW PIC IS COMPLETE!