The Mii Gunner’s side smash attack may have the farthest reach of all the side smashes…as should be expected from a firearms expert!! Looks like the attack missed this time, though. 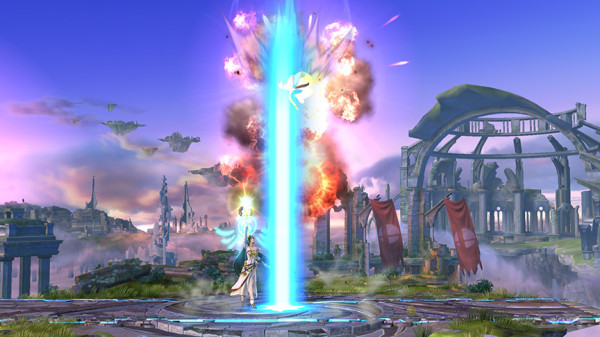 I talked about an attack with a far reach in yesterday’s post, but it didn’t compare to Palutena’s up smash attack! No joke, it reaches really far. It reached so far in this shot that even the rocketbarrels got blown up. 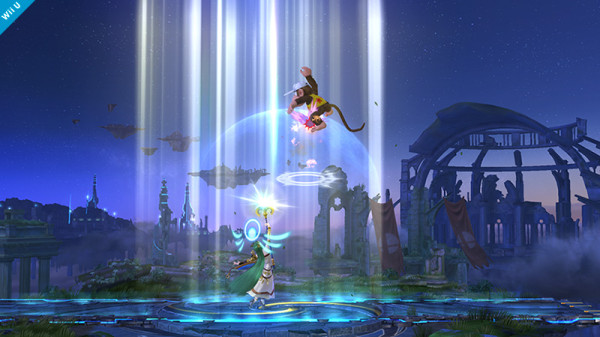 That said, if we’re talking just about range, even that can’t beat Palutena’s power, Heavenly Light. It has quite a damage field. However, this is a no-flinch attack, which means the opponents won’t react to the damage! 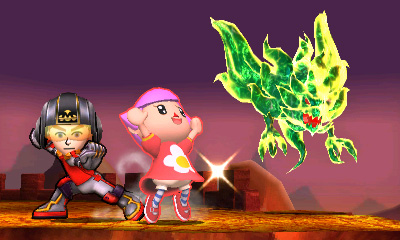 Just like in the original game, the Dark Emperor can cause status changes based on a fighter’s color. Red types generally get powered up. On a different subject, the Mii Fighter is wearing a Mii Force Helmet. 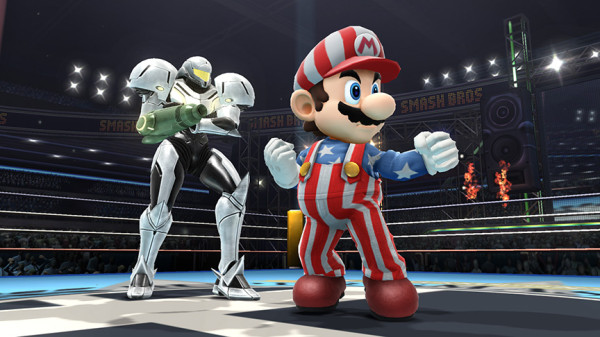 The character farther in the back isn’t from the Imperial forces, and the character in the front is not the infamous drum-playing puppet in Osaka. No, Mario is actually wearing an outfit from Family Computer Golf: U.S. Course! NES Open Tournament Golf might be a more familiar title. 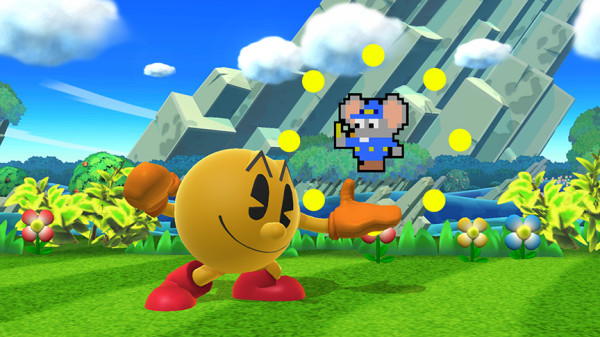 Pac-Man’s up taunt is known as Namco Roulette! Namco characters from the 1980s will randomly appear. 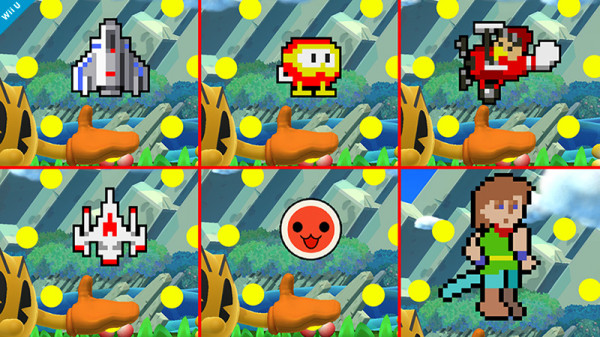 See? There’s a variety of characters. Huh? One of them looks pretty recent.

Oh, by the way! I’d like to reveal a new challenger. Instead of doing the unveiling on something like a Nintendo Direct, we’re going to live-stream the reveal on the official website on Monday, July 14, at 7:00 AM US Pacific Time (4:00 PM European Central Time). Looks like we’re nearing the bottom of the stash of new challenger videos that we’ve made… Like always, we put a lot of effort into it, so I hope you’ll enjoy watching it live.

A veteran of the Forum, you'll probably know me as H-J (Kaabii) or 8B1T. My main role on the website is as an assistant editor. My favorite Nintendo franchises are Mario, Kirby and Legend of Zelda, though I do have fleeting moments of entering fandoms beyond the Big N (mainly Japan only stuff).

it was already shown in the final of the trailer. Pac-Man turns into his classic form, but big and basically try to eat the others.

I bet this will either be a new Pokémon fighter or a new Mario fighter.

who were you before ludwigvonkoopa7777?

My former Disqus name was DryBowser9999.

I love your new name and profile pic. 🙂
It’s a bit weird see Dry Bowser turning into Ludwig, mostly because the first one is… well bones.

Thanks. 🙂
And I wanted to represent a character who actually appears in games, so I decided to go with a new look.

Maybe not one of those because they already have a lot of characters! But i think it should be a DK, Zelda or Kirby character 🙂

Zelda has actually the same number of fighters of Pokémon and Mario, a time that Sheik is not a part of Zelda anymore. (I’m counting with Ganondorf and Jigglypuff, I’m pretty sure they’ll come back)

Another dimension kirby stage say I