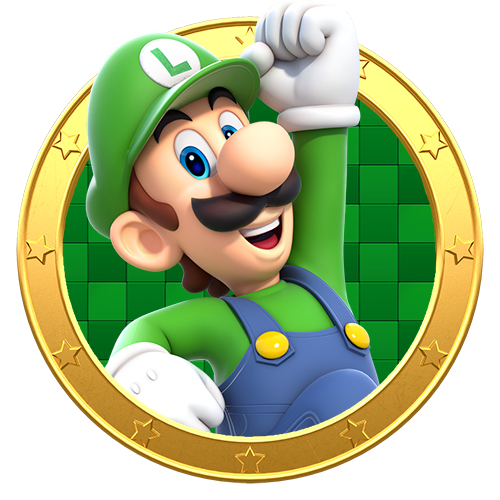 Luigi is Mario’s younger, taller, twin brother. He is the second character of the Mario Party series. Luigi’s color is green, but in the Mario Party Series, it is blue, because of Yoshi. Luigi’s favorite item in the early Mario Parties is the Skeleton Key, which allows you to open secret doors that lead to secret areas of the board. In Mario Party 7, his Special Orb acts just like Mario, only it is green. Luigi has assisted and fought alongside his brother on many occasions. Throughout his life, he has lived in Mario’s shadow, developing both cowardly and heroic tendencies. Mario Bros. (1983) marks his first appearance in a Super Mario arcade game. Originally a color swap of Mario, Luigi was created to facilitate a second player option. Since the two-player mode was dropped from most Super Mario games beginning with Super Mario Land, Luigi had gained his own identity and personality.

Luigi jumps higher than his older brother Mario. Like Mario’s Princess Peach, Luigi is rumored that Daisy is his damsel in distress. Luigi won a mansion in a contest he never entered, but found out it was haunted. Luigi’s Mansion (November 2001) is one of Luigi’s first games to be in the spotlight. Luigi’s very first game is Mario is Missing (1992). In this case, Luigi needs to save Mario. Luigi has a few powers of his own such as turning invisible in Super Mario 64 DS, jumping high, throwing green fireballs, and the Green Missle, a special move found in the Super Smash Bros. Series.