Nd Cube will not be developing Mario Party: Star Rush, at least according to the E3 2016 fact sheet for the game. Instead, the game will be developed internally by Nintendo themselves. This is the first Mario Party to not be developed by Nd Cube since the company took the reigns from Hudson Soft with Mario Party 9 in 2012. 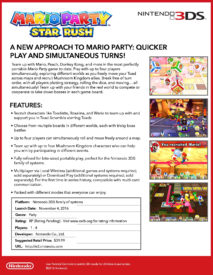 No other information has been released on the sudden change, but expect to hear more as we head towards the game’s November 4 release!