E3 2014 is just around the corner, meaning that the daily Super Smash Bros. for Wii U and 3DS images have been going up each weekday for nearly a year. SZ has already posted his top 10 earlier in the week; in this post you’ll get to see me choose my top 10 in a number of categories. General top 10 is now at the bottom – check it out! 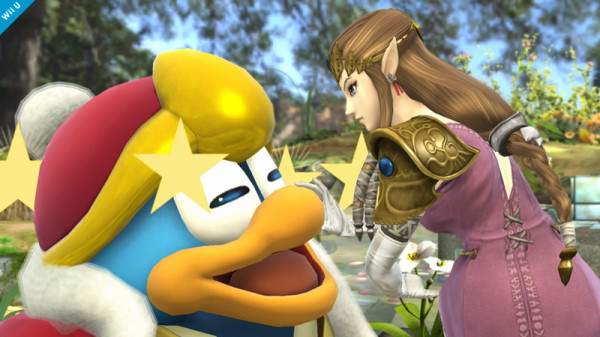 Any image with King Dedede’s over-the-top expressions is sure to be a hit. What really stood out in this image, however, was that someone as regal as Zelda would still be tempted to give ol’ Dedede a little slap/pinch/whatever you would do to a giant stuffed toy.

If this were the Olympics, WFT and Mario would make for great synchronized divers. I know there’s an image from later on where ZSS and WFT do it together, but you can’t help but admit this one takes the gold.

…you sure you’re comfortable like that WFT? Though I suppose you won’t fall off the plane as easily in such a contorted posture…

Hey! Get me off this mechanical… bug-thing! I sure hope any character caught on the Beetle’s deceptively powerful lift-off will have as bewildered of an expression as Marth has – while they are launched to their starry demise, no less. 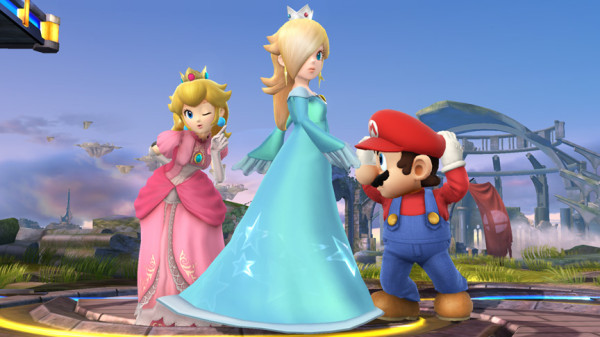 Mario, just who are you more interested in, hm…? This image certainly captures the innocence of Peach and mysterious charm of Rosalina – two foils for Mario’s affections… or rather, you, the player’s imagined ships…?

Donkey Kong, don’t just stand there, get out of the way! Don’t you know what it’s like to be finished?! 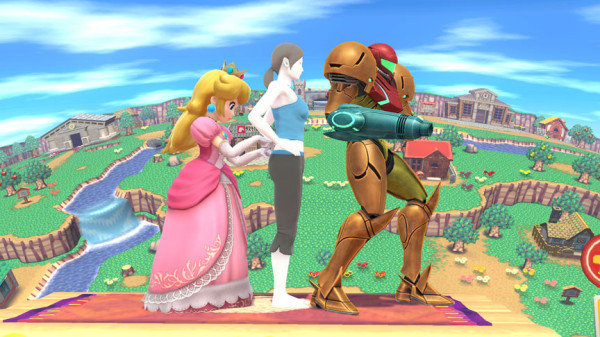 Peach, didn’t they tell you when you were young, hands to yourself? Tsk tsk… 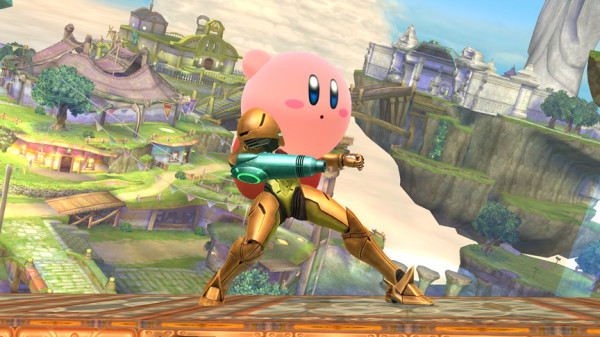 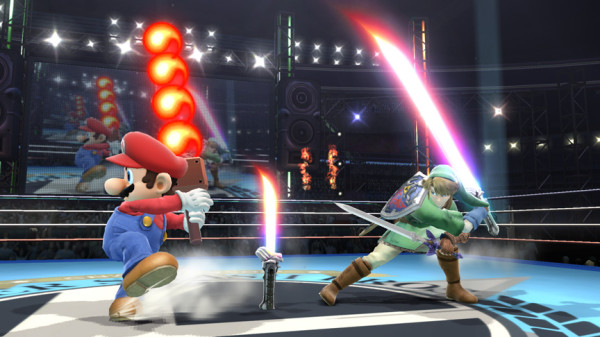 An item like the Fire Bar, while I’m not really sold on, certainly brings a refreshingly new take on limited use items – both visually and in actual gameplay. You have to admit Link looks cool dual-wielding as well. 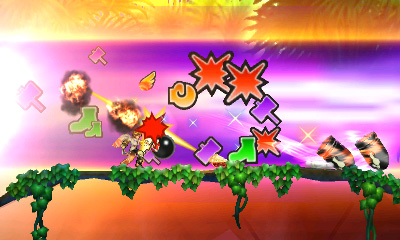 This was already explained in the Direct, but honestly, I’m such a sucker for City Trial inspired gamemodes, this has me sold. Certainly feels like it’ll be a lot more fun than figuring out how to place stickers on trophy bases in The Subspace Emissary.

Knowing that Lumas have limited lifespans like Pikmin, but also like Pikmin can be regenerated, all while being able to function like Nana of the Ice Climbers does (but with more flexibility and independence) will make playing Rosalina a real treat for mixup favoring players. And of course instils hope for those wanting to see a return of the summit climbing, condor fighting duo. 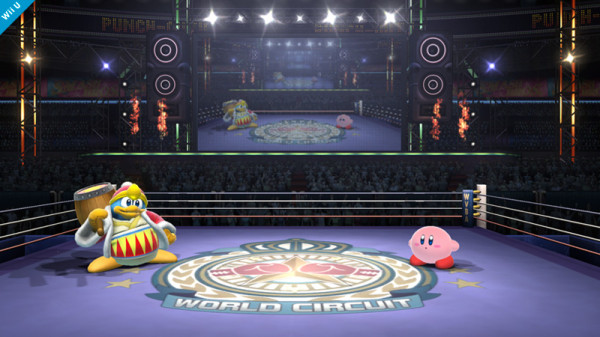 I’m glad the people who thought this stage was a Punch-Out!! stage were right. Having alternate forms of stages (Final Destination forms notwithstanding, they’re special cases) is unprecedented, unless you really want to count Mushroomy Kingdom (which isn’t a terribly fun stage); I’m sure I’ll be playing on both versions of the Boxing Ring. Keep it clean, let’s go Smashing! (Or boxing, in a Little Mac only affair.) 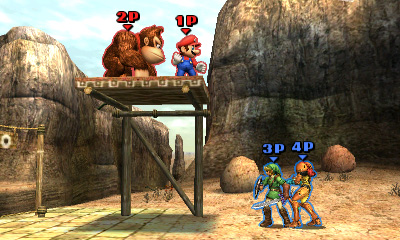 Freedom of palette swap in team battles will certainly make for happier players who really want Green/default Luigi on the Red team, or like a classical Zelda palette on – let’s say for example – Blue team. Sure this is only confirmed for 3DS so far, but they could easily achieve a similar effect on the WiiU with player auras of their team color. Let’s hope players don’t get TOO confused with this change…

Admit it, you wanted playable Female Villagers as much as I did (that means – VERY). I do hope that there is a degree of customization with Villagers such as using your personal Mii or ACNL villager as a basis. Pity for those (like Mii… I mean, me) who don’t have ACNL…

There’s always something satisfying about landing a devastating critical blow on a hapless opponent. Lightning effects like this one have also been used in fighting games like Soul Calibur to highlight the effectiveness of certain moves. Given this image is relatively old, I wonder if they’ve tweaked this – or perhaps, made it a visual effect that can be turned on and off (like the cel-shade outlines on the 3DS, or those damage percent indicators or high damage steam which I do hope are toggleable…). 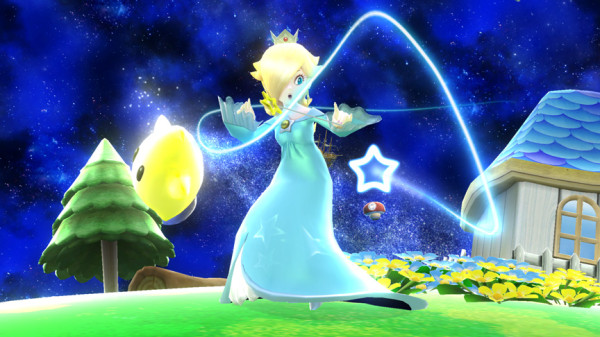 Rosalina’s unique mixup playstyle makes her one character I’ll be sure to try out early on. The Gravitational Pull exemplifies her style with a move that effortlessly nullifies incoming projectile attacks, and draws items nearby her. If only the incoming attacks could be redirected at another unfortunate victim… I would like to see this move have an effect on enemy players as well, but then she’d probably share a function like PSI Magnet or a weak Inhale, which doesn’t really scream individuality.

Little Mac is another character whose fighting style really doesn’t have a past representative in Smash. The ground-powerful, air-hapless infighter harks of 2D fighting games, and it’s the technicality that Little Mac brings that I really appreciate. Take for example his forward smash, and how it has tilt variations – I like to think of it as something similar to Marth’s Dancing Blade (you probably guessed that I like Marth as well) in that the role of each variation is different. I hope this paves the way for other characters to have neat technical bonuses such as this.

On another note, I’m not a big fan of Little Mac’s Power Meter as it is – allowing him to have a free KO opportunity even if he’s doing badly feels a tad wrong for me, and this is coming from someone who loved exploiting Revenge Meter and Ultra Combos in SSFIV3D. :p I’d personally tweak the Power Meter a bit so that he either loses a bit, or doesn’t gain any meter, when he gets hit too much – that way it’ll be more faithful to his source games, and also not feel overtly cheap. (Whether it’s cheap in-game remains to be seen…)

SZ’s pretty much already explained the reason I chose this as number 1 for technical/visual. Honestly, a Final Smash that serves more of a bizarre utility role isn’t fitting of the name. Let’s hope other characters (like Peach, Donkey Kong and Jigglypuff) get Final Smashes that not only represent them better, but also feel like an ultimate move. And if anything is to go by the preview image for this post (the five Mega Men), let’s hope for more cinematic Final Smashes too.

Back to where it all began one year ago. Seems a long, long time, doesn’t it? Mega Man’s reveal as a playable character took me a little by surprise, but I’ve had nothing but praise for the faithfulness Sakurai has done for the Blue Bomber. 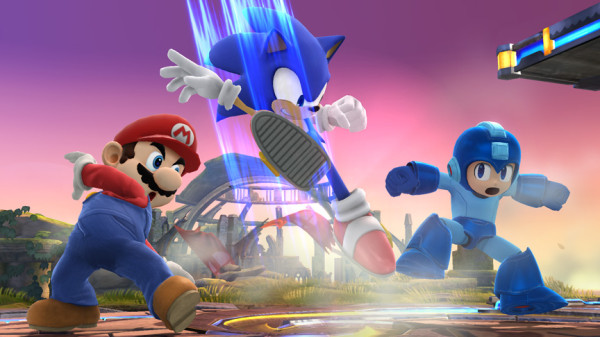 Iconic flagship characters in the middle of a fray. For some people, this image (and Sonic’s return reveal vid) was the realization of a childhood dream, to see Mario, Mega Man and Sonic fight together in an official licensed game. For me this image represents the respect, I suppose, that Sakurai has for some particularly important characters in video gaming history. I do question his choice in adding the Color TV-15 though, for I doubt anyone would have thought of that as a historical representative for anything… 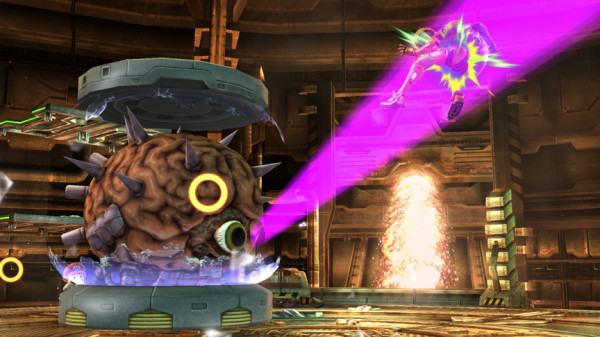 Out of all the Assist Trophies, Mother Brain is by far one of the craziest. How does one propose to summon the main antagonist of a series from a teeny tiny stand? That aside, it’s good to see Metroid getting some much needed love – it’s a great series and is in dire need of a reboot.

This image demonstrates many of the things that make Smash the game it is – vibrant characters and stages, fresh new items that have their own charm (the Super Leaf might even rival the Bunny Hood…!), and cheeky expressions for those in the heart of the action. Marth, don’t you think you should… let your hair down (and Falchion, while we’re at it) for just a bit? 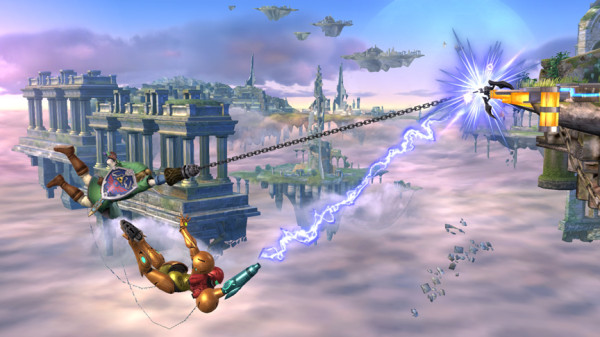 We already knew that there would be ledge grab trumping mechanics introduced from an earlier image. But you can’t help but marvel at two courageous fighters hanging on for dear life by their tethers, with the eerie majesty of the Battlefield in the distance… unless they were practicing their stunt routine. But I highly doubt it, given how Samus vs. Link is becoming the archetypal “For Glory” rivalry in these games. I have a quite a soft spot for Kid Icarus Uprising; it’s a wonderful game and for those of you that haven’t played it, you’re missing out. Back at the time I saw this image (and the one with the Upperdash Arm), I was incredibly pleased that it appeared Pit had a revamped special moveset. Naturally, his Brawl moveset really only had his NES game to draw inspiration from – and even then, to come up with something like the ever-spammy Angel Ring (side special) and the bow/dual sword is unique in itself; but it’s reassuring to see Pit’s moveset reflect Sakurai’s commendable work on Uprising. I like to think that any character deserves to have some element of evolution and revamping – not just graphically, hopefully. :p

Two Kid Icarus themed images in a row… This stage reveal was so fittingly timed following the supposed Palutena leak image (there still hasn’t been a hard confirm or deconfirm last I heard), it’s almost as if Sakurai had been planning something like this all along. While the stage itself might not be everyone’s cup of tea (if comparison vids are anything to go by, it’s bigger than New Pork City, eep) the context in which it was revealed was certainly memorable.

To be honest, I wasn’t expecting a Rosalina reveal. I was rather unsure whether the hype in her camp was enough for her to earn a spot among other greats in her home series and others; but everything I’ve seen through videos and images is winning me over, and she has proven that she deserves her place in the roster; not only due to her immense popularity, but also the ways in which Sakurai has made sure the gameplay she brings to the Smash table stands out from anyone else. Mario Galaxy has to be one of the most gorgeous looking stages in the WiiU version. SZ’s aleady given the rundown on this stage; all I have to add is that I’ll be sure to play on this stage with its simple but unique gimmick. Sadly the Final Destination version of this stage doesn’t nearly give the same peaceful and majestic vibe.

Little Mac was by far the one character I really wanted to see get in – and what do you know, he usurped Diddy Kong’s expected reveal while punching in! Like I’ve mentioned in the Technical Top 10, Little Mac embodies the traditional 2D fighter in the Smash universe; and while Sakurai might claim that Little Mac’s repertoire of punches (and practically only punches) is restrictive, for me that simply adds depth through deceptive simplicity. Not that Little Mac is simplistic by any means. :p I pity those in the Japanese fanbase who cried for one of the Punch-Out!! opponents to be playable – do they not appreciate the underdog story? In any case, Little Mac perhaps embodies the spirit of playing Smash altogether – you gotta have heart, keep it clean, put in 110%, and keep on battling no matter the odds. Heck, that’s pretty much a life lesson right there.

Feel free to comment, whether it’s about my poor taste in image choices, sharing a few laughs at poor Peach’s expense, or wondering why I talk about tilt inputs and things that probably only matter to competitive players.