Items are at the heart of the frantic gameplay of the Mario Kart series. With Mario Kart 8, four brand new items will be thrown into the mix! Two have been confirmed and explained, while the other two have yet to be shown in action.

Two more items are also set to appear in the game, but what exactly their function is remains unknown. The first item appears to be some kind of box or block with a horn attached, while the second item is simply the “8” from the game’s logo. Could this be a Lucky 8, an item that would allow you to circle eight different items around your kart at once? 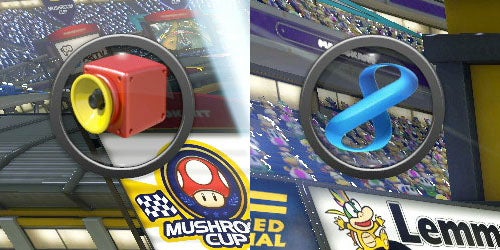 While not necessarily an item, a Coin can also appear in the item roulette. Using it will add an additional two coins to your coin count. Let us know your thoughts on the new items in the comments below!

Mario Party Legacy is giving away a free copy of Mario Kart 8!

The item with the game’s 8 will probably be called the Magic 8.

Wow. I heard someone on Miiverse say there would be a lucky eight. I thought it was a joke.

The red box with the horn could maybe act like one of the items from Super Mario 3D World like the flashlight box or the one box on your head that shoots out bullets. Or this could be a new item and if that is a horn on it maybe when you use it a loud noise will come out and it will make all the players around you spin out. And right now there is 21 items for Mario Kart 8 (Including the coin item) making it I think the most items in any Mario Kart game, cause in… Read more »

the red box with a horn will possible replace the Pow Block from Mario Kart Wii it will create shockwaves while playing Mario Bros Theme.that’s my look at it.Yes Lucky 8 will be fun but i hope it will randomly choose which items will rotate around your kart.

I totally forgot that they didn’t add the Pow Block in Mario Kart 8! I really hope that does return, but if it doesn’t then your idea will be great to replace the Pow Block.

do you think they will add boo or Mega Mushroom back?i want them but on the other side ir’s bad for hackers if the wii u is getting a hack program

I’m thinking that the horn item will act as it does in Sonic and Sega All Stars. As for the 8 logo, it’s without a doubt the lucky 8…

Exactly what I think. 😀

its the cannon box from 3d world

Wow, these new items look great! I think the boomerang and Potted Piranha are really neat! I wonder, are these four items the only new ones? This is a lot already! 😛

That Guy Over There

I wonder what will happen to the Lucky 7/Magic 8 items and it’s successors when the Mario Kart series reached a high number of different versions. 😛

By the way, the coin appeared in SMK too.

I think the Potted Piranha Plant is a GREAT idea! I never would’ve thought of that, to be honest. And I also like the Boomerang Flower, as well. Hmm… I doubt that the “8” from the logo would give you eight items, that would feel to familiar to MK7. Whatever it is, it’ll probably be a mind-blower. My prediction with the “sound box”, is that it would work similarly to the Blooper. It would generate sound waves that are so intense, it will make the screen all blurry and, I don’t know, create a shrieking sound? Not that powerful of… Read more »

The 8 MUST be the most powerful item in the game, even more powerful than the bullet bill.

Wonder what it will do…

I think the box will make the oppoenent’s screen go upside down, causing much confusion for the player. (similar to that music horn from Sonic and All-stars racing)

The most top picture: The more you look at DK’s face, the more scary and disturbing it gets.

And as stated by Gamexplain, certain items have timers circling the item icon so you know how much time or how many usages you have left.