It’s always a pain when a game is announced and any new information is kept secret for months on end. Thankfully, that doesn’t seem to be the case with Super Mario 3D World. New images have surfaced for the game, showing off closer looks at the characters and levels that were revealed earlier this month. Check them out below, as well as a quick commentary on each image.

Here we see Peach in her Super from, standing on top of the new clear pipe the game is introducing. It looks like Goombas will be able to make use of the pipes as well! 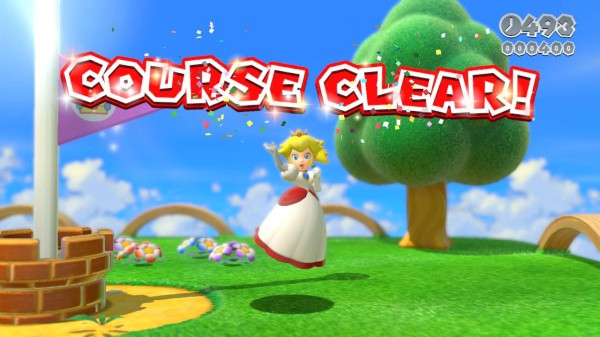 Peach just finished World 2-1 in her Fire Flower form. We haven’t seen this color of dress before, but take note that Peach uses the same hairstyle that was introduced in Super Mario Sunshine. 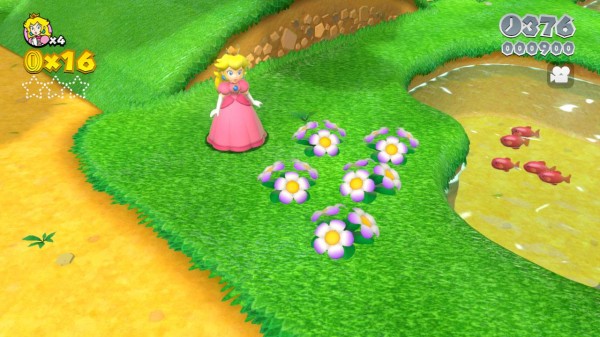 Notice the Camera icon in the upper right corner. This seems to be a replay of the level just played, or perhaps some form of Super Guide. Whenever the Camera icon is present, the camera angle of the game is slightly turned, showing off a different perspective. Perhaps you can turn this camera angle on and off during the gameplay? Also, realistic fish!! 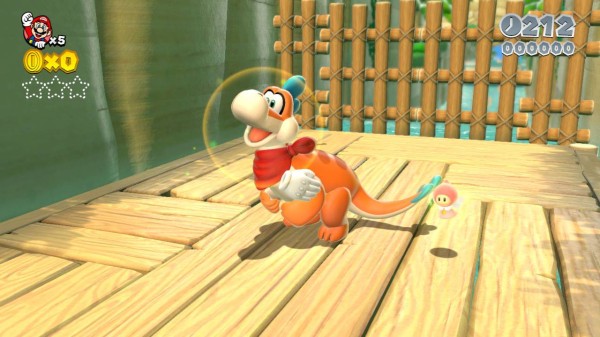 Here we see World 1-5, featuring the dinosaur like creature that you use to ride down the river. What’s more interesting is the pink character on the right. We don’t know anything about this character, but many are making connections to the Super Mario Bros. 2 species known as the Subcon, simply based off appearances. The image also shows functionality with the GamePad, displaying how the player can pet the giant creature. 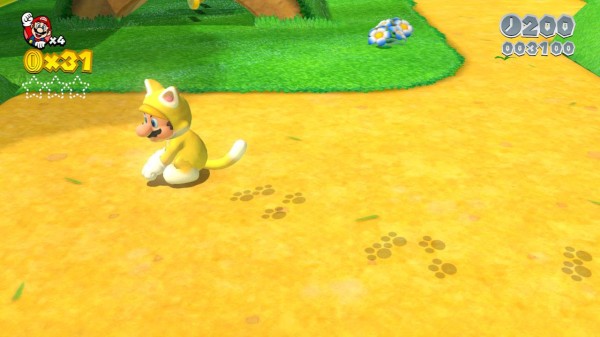 Cat Mario up close, showing off how paw prints will be left in the dirt trails. Nothing too interesting here, but I do wonder why the camera is zoomed in so close.

As we saw in the trailer, Mario and the gang will be able to pick up and throw items like snowballs and baseballs like the image above. Again, notice Mario’s footprints in the grass. 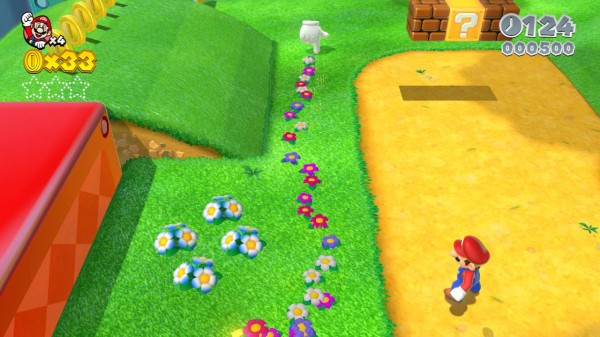 The last image shows another use of the GamePad. Moving your finger across the grass allows you to grow flowers, although it seems like this is just a fun little addition rather than something important to the gameplay. Perhaps this functionality will be of greater importance as the game goes on.

We saw Fire Peach’s dress in the trailer

And in the E3 demos. I’m not saying all this information is new.

Ohh… sorry now i get it

Still waiting for frog suit or tanooki to be confirmed or more gameplay picture. Would like bomerang suit back but who know

Actually, I would think the Tanooki suit is confirmed, considering it was seen in the trailer (in a quick scene, mario was seen wearing a tanooki suit)

I ment more info on it or videos I know it is game and frog suit is confirmed in develop direct.

Are you Sure? Says who?

No Tanooki Suit. Likely it’s a Beta Element. Besides we now have Cat Mario and Peach can Hover.

But that icon shows the GamePad. This one is a camera, so I’m assuming it’s different.

Had to go back and check. 😛

The Subcon-like creature seems both Subcon-like and… for some reason also likely to be from a game like Dream Team lol – wither way the connection to dreams seems rather heightened by that screen :p

Looks at the fourth picture: YES!!! Wart is coming back!!! 😀

Maybe not since it seems like Bowser is still the main villain.

I think that Wart will be returning as a recurring boss, however, Bowser has been confirmed to be the main villain. Maybe Bowser and Wart teamed up?!

I hope Wart returns somehow, but see-ing bowser as main villian in main mario series should be secondary villian or just a boss for one game and have someone else take to main villain and final boss spotlight. I like bowser but he been main villian for most mainline mario game. Kinda like Mario rpg games.

The guy who directing this game, even remember that someday wart will be revivied. I want tatanga to be revived as well, probably dk jr as a hero.

Yes! Tatanga should be in Super Mario Sunshine 2!

6 Power Ups Total would be likely how many. 1 more than the Indirect 3DS Sequel. Be good to see the Ice Flower, but not the Super Leaf(Peach already hovers and we not have the Cat Bell).

Well it shouldn’t be here. Peach can hover, and we now have Cat Mario. I suppose it would be a Beta Element.