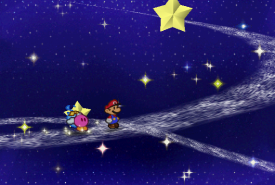 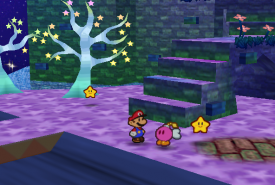 After going through and saving all seven of the Star Spirits, Mario takes a trip to the heavens, walking along a stardust covered walkway, all the way to Star Haven at the end. The ground is purple and the trees are blue, but this setting makes for an enchanting experience. This is the home of the Star Kids, specifically for Twink, the Stark Kid that helps Peach in the castle. Star Haven only has three areas to explore, but it is still one of the most unique locations in the game. 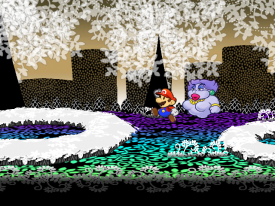 Who was expecting this one? A multi-colored flooring, white flora, and polka dotted landscapes are just some of the interesting sights you will see in the Boggly Woods. Flower patches arrange themselves in neat and even circles, and the Giant Tree serves as a home for all the little Punios. Madame Flurrie resides in her elegant home off in the distance and is the only non-Punio resident of the woods. Even the enemies have gone albino to match their setting and habitat. 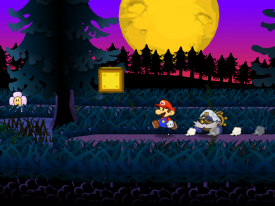 The Glitz Pit was full of colors and energy, bursting with people and excitement. Then came Twilight Town, the stark opposite of the Glitz Pit. Covered in dark colors and a creepy atmosphere, Twilight Town was the home to a mysterious group of people that quietly inhabited the area in their shadowy forms. As little life as there was in the town, the nearby Twilight Trail continued on with the chilling atmosphere, welcoming in a new batch of enemies and a dark a mysterious forest. The giant moon and the sunset colored sky didn’t help the cause of peacefulness. 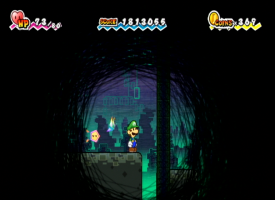 Until Super Paper Mario, you probably never thought about what exactly happens when Mario loses that last life of his. The Underwhere tries to answer that question as it is the land of the Game Over, a place whose inhabitants never made it to the flagpole.  The Underwhere is a place unlike any other, with an atmosphere that brings dread and uneasiness all over. Enemies and creatures bring terror and fear, and I’m specifically looking at you, Underhand. 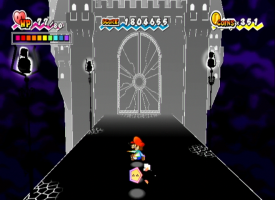 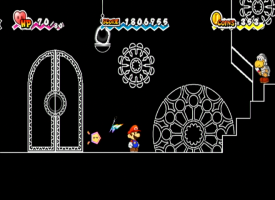 Save for the purple and blue hues of the Void, Castle Bleck is completely composed of black and white features. Save for the enemies and Mario himself, nothing strays past this art style. There really isn’t too much else about this location that makes it so special, but the color scheme truly sets the mood of the final world of the game, and it’s something that has never been done in a Mario game before.