As the title describes, this post is full of New Super Mario Bros. 2 spoilers! If you are not interested in seeing the final level and final boss, leave this page immediately! For those that are interested, continue reading!

With that, the final list of worlds have been revealed: 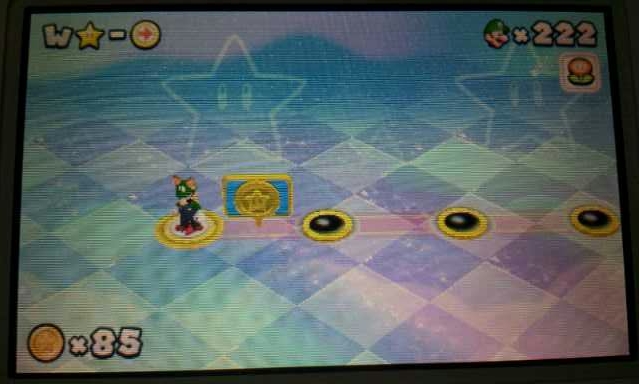 Accessing the three extra worlds is done by completing one of the cannon levels, the levels where Mario constantly runs until he reaches the end. No word on what kind of levels the extra worlds contain, or how DLC levels come into play.

We also have information on the final boss of World Star. As many would expect, Dry Bowser is back in all his glory, reprising his role as the last boss in the game.

What a joke ! There is even less worlds than New. Super Mario Bros !!

New Super Mario Bros. had 8 worlds. This game has 9 worlds.

Yes, but the last ones are just specials worlds there is just 6 “normal” worlds …

But alas, New Super Mario Bros. only forced you to play 6 worlds to beat the game. Without using cannons or Mini Mushrooms to beat World 2 and 5 bosses, you were allowed to skip Worlds 4 and 7. So it’s the same, really.

Did anybody notice that Luigi was playable on single player on the 2nd and 3rd screen.

I did! But the question is, how do you unlock him?

After you beat Bowser in world 6

Thanks,but did you also notice that he had 222 lives when the infinite lives reach to 99 in the New Super Mario Bros. series.

Yes, but maybe they changed that because of Super Mario 3D Land.

Maybe luigi is unlookable after world 6 or you can use him anytime.

Hey Mario wiki says the worlds bosses reznor is the fortress boss 2 at world 1 and 4 at world 2.

No, they just appear in either 2-packs or 4-packs. That’s what they’re saying.

All Glory To The Hypnotoad
Reply to  j-man

and i have a six pack

j-man
Reply to  All Glory To The Hypnotoad

To play as luigi, press l and r like the first game

That was my idea right when I saw the solo Luigi shots since Nintendo loves old throwbacks. Hopefully this works

How do you know?!

It says how to unlock him on Mario Wiki you just have to beat Bowser then you can switch between Mario & Luigi!

Nevermind you do not get to switch between them but you do have to beat bowser then you hold L+R again.

i think these are worlds that you acsess through staqrcoins

Okay, how long until we receive an information dump for NSMBU?

Is sill waiting for a food themed world.

I would like to see factory, mill and haunted overworld worlds someday.

Can somebody please post a video of Dry Bowsers Fight!! Cant find it anywhere!! Thanks!

I wonder if NSMB2 will have a level editor.

That was only via hacking.

Can you upload NSMB2’s Game Over Screen video?