E3 2012 has come and gone, and no Mario Party information of any sort with regards to the next installment was announced nor mentioned in any way. But it doesn’t mean we can’t think about the next Mario Party titles after the show, does it?

In Mario Party 9, one can’t help think of New Super Mario Bros. when taking a good look at Toad Road, the first board map played by most newcomers to the actual game. The idea from World 1 of New Super Mario Bros. resembles the Toad Road board with its colors, features and scenery. Even some of the mini-games are reminiscent to New Super Mario Bros. It’s nice of the developers to have thought about mainstream Mario titles when creating certain aspects of Mario Party 9, (even if the developers themselves don’t necessarily agree that to be the case). It might have been a complete coincidence that it looks a lot like the first world of the New Super Mario games. This is a good idea, but should there be more relations to the main Mario series in the Mario Party titles? Sure! I’ll list some ideas from top Mario series games of the past:

This one is easy. The entire theme of this Mario Party title can be of Dinosaur Land from the highly acclaimed Super Mario World game for the Super Nintendo Entertainment System (Super Famicom in Japan). Of course, there wouldn’t be any kidnapping of sorts involving Princess Peach because she’s obviously going to be a playable character. Whatever the story is, the entire land mass can serve as multiple board maps (one large map would just be too large). Perhaps split up each world of Dinosaur Land as one board map to its own. One’s I’ll choose: Yoshi’s Island, Donut Plains, Vanilla Dome, Cookie Mountain (connected with the roof of Vanilla Dome and the bridges), Forest of Illusion, Chocolate Island, Valley of Bowser (if Bowser’s going to be involved in this, then he would most likely be here), and Star Road. Special World could be something else not involving Board maps considering how it’s pretty straightforward (literally). Each board could have themselves be placed with respect to Dinosaur Land in its entirety. With the Wii U’s improved hardware, doing this should be easy. For example, if you are currently playing in Chocolate Island, the backgrounds should show a live look at the rest of Dinosaur Land with the Forest of Illusion to the North East, and a large Bowser statue to the Northern West. That would make for quite an experience.

So many Mario Party titles, and we have yet to set Princess Peach’s Castle or Castle Grounds as a setting for board maps. The answer to the “why not?” question is beyond me. Courses like Whomp’s Fortress, Lethal Lava Land, Big Boo’s Haunt, Jolly Roger Bay, Cool Cool Mountain, Tick Tock Clock and Rainbow Ride would fit in really well as multiple boards each with their own unique scenery and attractions. If Bowser would really be an enemy once again one of the Bowser stages would fit well as a board, and if boss battles were to continue like they were in Mario Party 9, then some not yet used bosses from Super Mario 64 would be great. 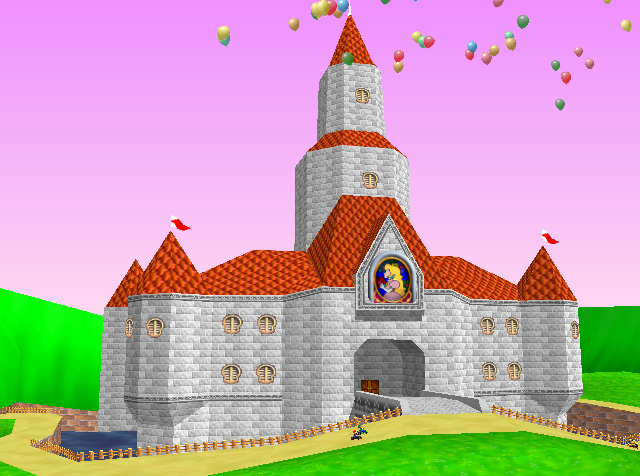 Though this game wasn’t the best received Mario title, it was still a great game with great scenary. Delfino Plaza could possibly be used as both a board and the theme of the game (the main menus could be connected with Delfino Plaza in some way). Boards can include Bianco Hills, Ricco Harbour, Pinna Park, Sirena Beach, Noki Bay, Pianta Village and if Bowser is in the game, Corona Mountain can serve as the final stage. However, One main problem I find with this would be the scenery and differences among each board. Since they all are part of the island chain with relatively similar scenery, making a game based on Super Mario Sunshine would make the boards be rather redundant. Perhaps mix in elements from this game with another Mario game with similar situations? Now this one would be a tough one, but it will also be amazing. Using the real planet-like gravity would make this Mario Party experience out of this world (literally). Center the main theme to be Rosalina’s Observatory and the Domes could pertain towards the modes of the game. Example? The Terrace could work as the main Party Mode of the Game, and perhaps Rosalina can be the guide for the future Story Mode. Creating boards out of different galaxy locals such as Good Egg Galaxy, Gusty Garden Galaxy, Freeze Flame Galaxy (a board combined with both lava and snow would be fantastic), Dreadnought Galaxy (that would look amazing as a board map as a battle -spaceship like that), Ghostly Galaxy (it’s only natural to have a spooky board in a Mario Party game), Buoy Base Galaxy (those spinning tower sections can play good roles in changing gameplay around the board), and of course a Bowser stage. For the Bowser stage, I believe the Galaxy Generator of Super Mario Galaxy 2 will work well here. As a final stage, Peach’s Castle grounds combined with Toad Town from the beginning of the first game could look pretty nice. Make those buildings accessible to us in some way. Don’t you wonder what those buildings look like on the inside? The Universe of Super Mario Galaxy is filled with so much potential, and it’s a shame to just let it drift away into the cosmos after only 2 games. Let it live! Even if I only described what future Mario Party games can use as boards and themes with respect to one game, it wouldn’t be too out of this world to see something with a mix of every Mario game. From Donut Plains to the Dreadnought, one Mario Party game can hold all forms of variety coming from different Mario series games as long as redundancy is reduced to a minimum with features. There are obviously too many places in the Mario universe and there are also other mainstream Mario games which the Mario Party series can use to its advantage, so I cannot list all of the possibilities. Yes, I do believe that the Mario Party series should integrate ideas from the main Mario series. This, is just scratching the surface. Any ideas on boards or themes which the future Mario Party titles can use from the main Mario series to create new Mario Party experiences?