Back when the Nintendo 3DS was first revealed to the public at Nintendo’s E3 2010 press conference, a handful of titles were reported to be in the works for the new handheld. Among the many games were Mario Kart 7, Star Fox 64 3D, Animal Crossing, and one of my most anticipated games, Paper Mario for the 3DS. Fast forward two years and we are going into E3 with no more than two trailers and handful of simple screenshots for Paper Mario. With Paper Mario expected to release later this year, actual information, as well as gameplay footage and playable demos, are expected show up in a just a week. 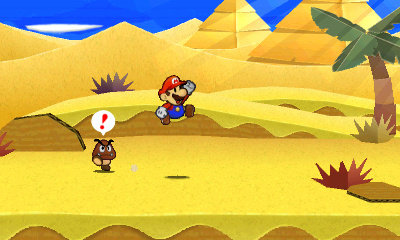 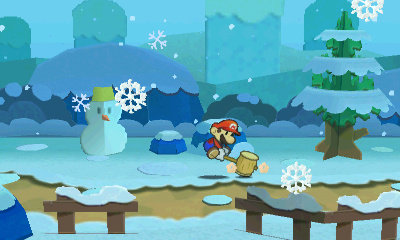 The original Paper Mario on the Nintendo 64 started it all. It was a fantastically written story that led Mario and pals through an RPG adventure, and all this carried onto the Gamecube with Paper Mario: The Thousand-Year Door in 2004. Super Paper Mario on the Wii brought an unfamiliar dynamic to the game, scrapping the battle system for a greater focus on platforming, something the fans of the series were not too thrilled about. With Paper Mario on the 3DS, we are seeing a return of the classic RPG style, a welcomed feature that is rooted in the series since the beginning.

What we know about Paper Mario on the 3DS is all based on the media that has been released by Nintendo in the last two years. Not surprisingly, this information is scarce and doesn’t help us understand some of the major changes that are headed to the game.

One of the most noticeable features is the return of the battle system, and just like in past Paper Mario games, Mario and enemies will duke it out in turn-based battles. The most obvious change to the battle system is the addition of stickers. Stickers are apparently collected throughout the game and are used to enhance moves and give different abilities during battle. So far we have seen stickers give the ability to multibounce on enemies, and even a sticker that creates paper cutouts of enemies, right before a giant fan blows them off the stage. Stickers have only been seen during battle, but it will be interesting to see how they are incorporated in the main world. It’s also interesting to note that any kind of Flower or Special Power seems to be removed. 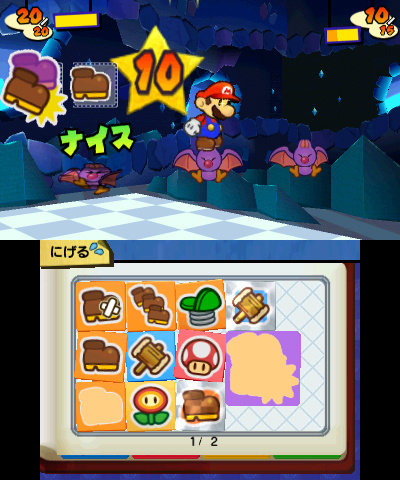 Now for the characters. Again, very little is seen in the small amounts of details we have, but we do have what looks to be our first revealed partner for the game. For the first time in the series, a Chain Chomp will accompany Mario as he makes his way through the many lands of the Mushroom Kingdom. The Chain Chomp functions similarly to that of the Koopa partners of the first two games, wherein the Chain Chomp is able to thrust forward like the Koopas did with their shells. There is also a single instance where Mario is seen scampering around the grasslands with a Green Toad.

Outside of that, there a few moments in the second trailer where Mario is seen with a sparkling crown. Could this crown really be a partner? It would be safer to assume the crown is more a guide than anything else, similar to Twink and Tippi from past titles. Maybe this is the crown of Princess Peach? The Paper Mario games have some of the best and most engaging stories in the Mario series, so a plot that involves a living crown is no surprise. Besides the crown, classic characters like Toad return to populate the towns, while classic enemies like Goombas, Koopas, and Dry Bones return along with some new faces like Ice Bros and a Montey Mole king. 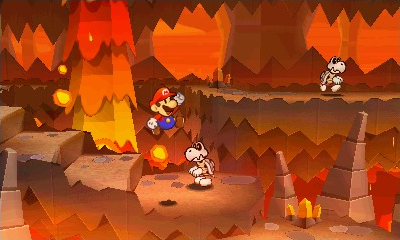 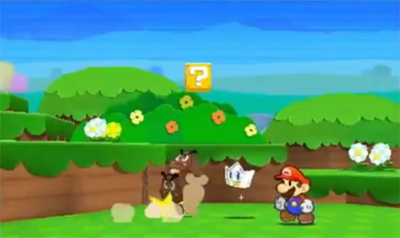 From everything we have seen, the game is living up to that quality known in the Paper Mario series. The worlds and areas you venture to are lively and colorful, with distinct themes like lava and jungle making for some interesting locales. We have an underground level, an snowy scene, and even what looks like a Ghost House. Knowing the series, this is only a sample of the awesome locations Mario will discover on journey.

Paper Mario for the 3DS is looking to be one of Nintendo’s strongest games for this year’s holiday season. While we currently know so little about the game, this E3 should shed some light and give fans the information they have been waiting for since the initial announcement. With just a week left until Nintendo shows off their latest offerings, let us know what you are most excited about and try to call out some predictions!

cool I will be wating for it but on my birthday is when i want it.

now we have a paper mario on the 3ds which i knew about long ago but i did not know about the 2nds trailer. now that this will soon come it would be awesome if they mad a mario and luigi 3d

Stickers eh? This is definitely going to be an interesting gimmick in the game, let’s hope it was done well.

Me and some of my friends awhile ago figured out what mario has to collect this time. (At least we think) Instead of collecting Star Spirits, Crystal Stars, or Pure Hearts, he is going to be collecting crowns of some sort. Maybe that explains that crown next to mario. This is easy to figure out if u look at the trailer closely. When it first starts, and the book is opening up, you can notice crowns at the top of the pages, which is a very big giveaway to the crown theory.

That’s what I thought too. I think crowns are going to be the special end of chapter collectable, like, as you said, star spirits and crystal stars.

Even more evidence of mah theory! All the bosses that they have released so far (at least that I know of)have crowns. Examples: King Monty, and some goomba stalk with a goomba with a crown in the middle.

I heard LM2 might be for the Wii U.

Considering all the work already put into it for the 3DS, I see that as completely false

Well probably not.Nintendo was just probably putting the work in the Wii U without telling us.

Sorry, I Frogot to say that Luigi’s Mansion 2 Will Be The First Mario Game To Support the CPP (Circle Pad Pro).

I wonder if the Koopa Bros. will return and bring buddies,the Goomba Bros.!

I actually say countdown to MPX.

This Game isn’t real yet.

Did you know those are super cheap these days.Although I’d prefer the golden one.

I hope there are partners. It’s what makes the game fun and exciting. It would also be nice to see a return of a few familiar faces because it seems like a lot of characters are in one game and out the next.

Yeah,what about the Koopa Bros. and they can bring friends,the Goomba Bros.!

Yeah sure, why not? I’d actually be happy if they bring back anyone. I just don’t want to see every character disappear after they play major roles in the games.

I’d also love to see the return of Spark, Vivian and the Yoshi kid.

they were but how about ms mowz

I can’t wait to try out that Green Toad.
It’s about darn time Mario got a Toad partner.

How do you get a picture?
I REALLY want 2 know.

ugh, this game is already overhyped as hell. but oh well. doesn’t look too bad, although Super Paper Mario and PM64 look a million times better.